The Gobler Laboratory of Stony Brook University reported on Monday (5/24/21) of a damaging mahogany tide that is spreading across much of Long Island’s South Shore.  The tide was confirmed to be present at high densities across Long Island’s south shore and East End – from East Hampton to Bay Shore.  The Gobler Lab called the event “unprecedented,” in that algae bloom had spread throughout open waters like the Great South Bay, Shinnecock Bay, and across the East End.  Historically, mahogany tides have only occurred in isolated tributaries.

Harmful algae blooms (HABs) occur when algae growth becomes out of control in the water, causing harmful effects to people, marine life, seagrasses, birds and even pets.  HABs are often referred to as “tides,” and identified by their color – you may hear to these reported in the news as brown tide, red tide, rust tide, mahogany tide, etc.  These blooms are caused by excess nitrogen entering our waters.

There are over 380,000 individual cesspools or septic systems in the ground on Long Island.  Most people don’t think twice about where our waste goes when we flush, but that nitrogen-rich wastewater flows from our toilets into our cesspools or septic systems, and then leaches directly into our groundwater.  These antiquated systems were never designed to remove nitrogen.  This nitrogen then flows from our groundwater into our surface waters (bays, harbors, rivers, streams), where it fuels the overgrowth of algae.  Think about it, when people fertilize their lawns or gardens, they are using fertilizer that mostly consists of nitrogen.  Nitrogen helps plants grow.  So, tons of nitrogen entering our water is fueling the algae to grow uncontrollably.  While we’re talking about fertilizer, nitrogen from fertilizer used on farms and lawns is also making its way into our waters and making our problems worse. 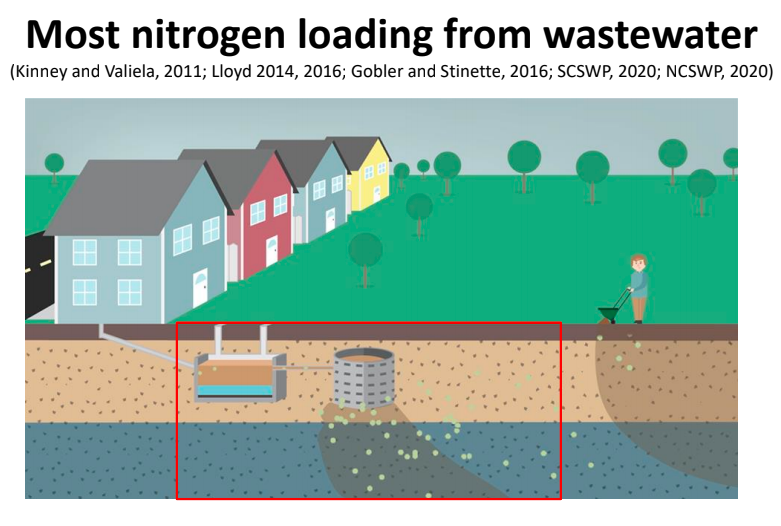 Excess nitrogen in our waters is mostly from wastewater – Credit Dr. Chris Gobler

These harmful algae blooms can have devastating impacts on our environment and marine economy.  They remove oxygen from the water, which can lead to large fish kills.  Some HABs can produce deadly toxins that are lethal to marine life and can be a public health threat.  A lot of times, the presence of these blooms will result in the closure of our beaches to swimming, fishing and shellfishing.  They have destroyed our shellfishing industry, caused a loss in tourism dollars and can even decrease home values. 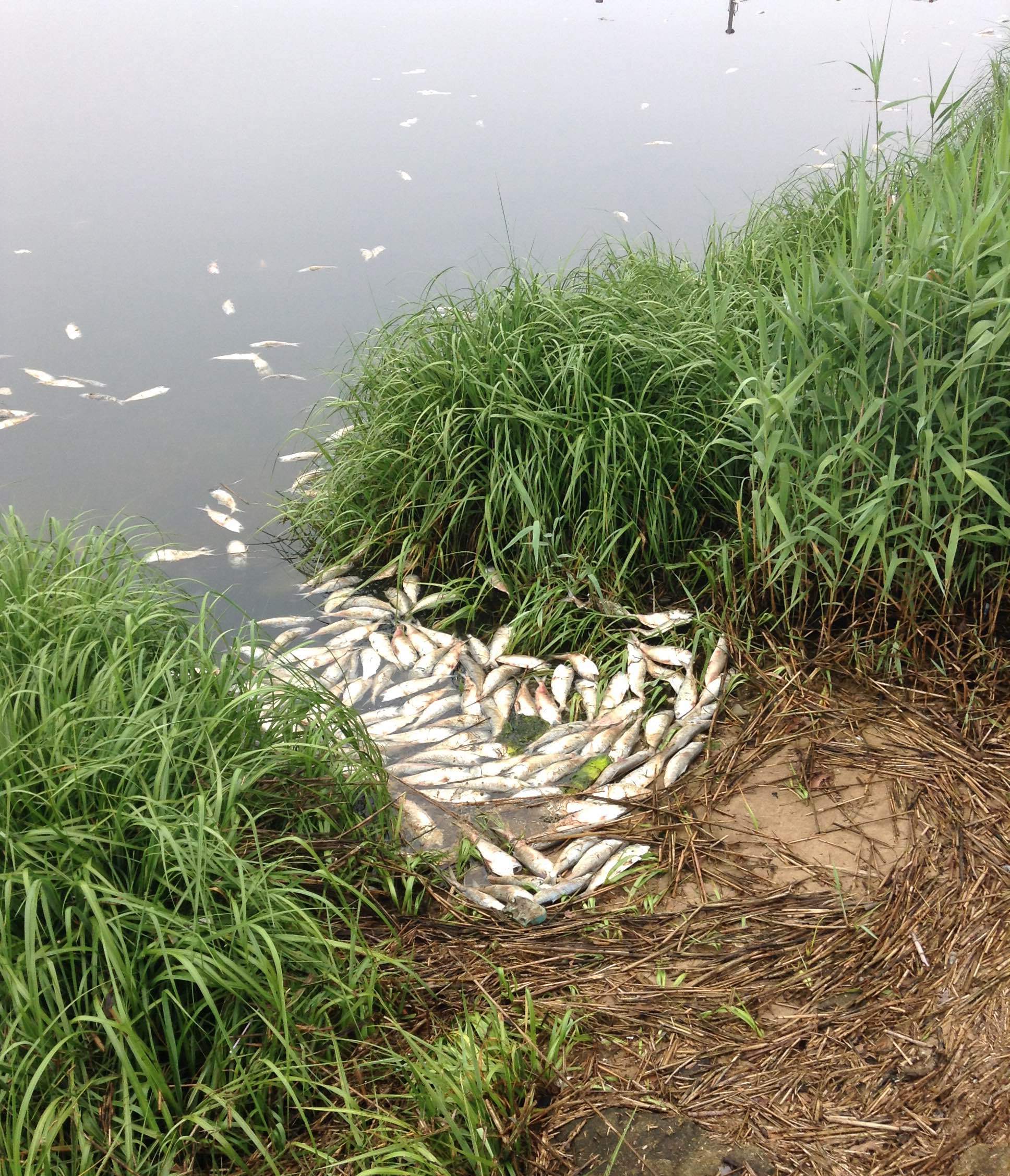 Dead Fish in the Peconic River in the Summer of 2015. This event occurred when a harmful algae bloom depleted the oxygen in the water, causing massive fish kills.

These blooms plague waters across Long Island all summer long.  They mostly occur in the summer, because algae growth also requires strong sunlight.  Due to climate change, these blooms are increasing in frequency and severity.  For much of the past decade, nearly every major bay or estuary across Long Island was afflicted with a harmful algae bloom, oxygen-starved waters, or both. 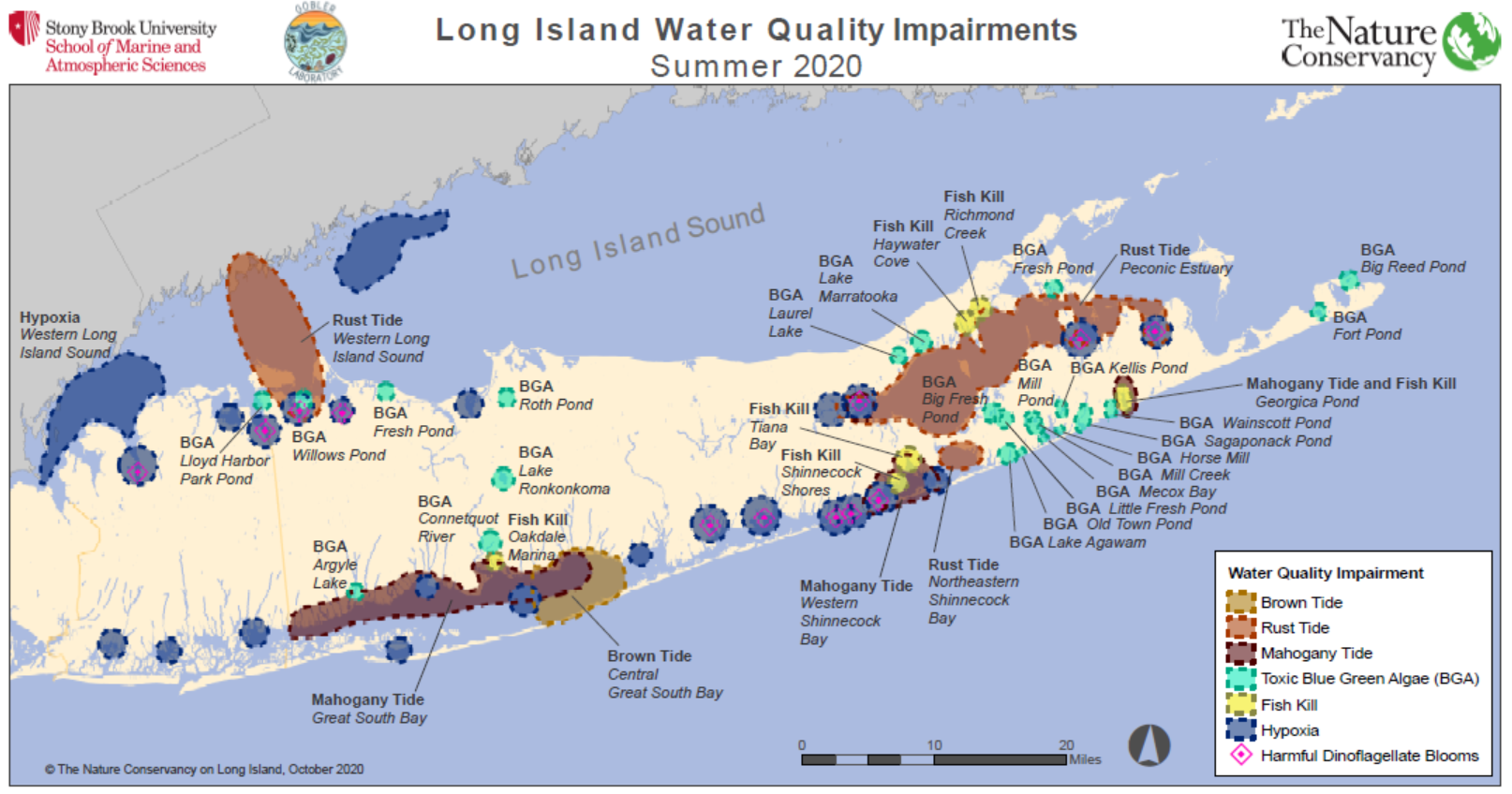 The good news is there are solutions! There are new nitrogen-removing septic systems that can be installed to replace our old, polluting systems.  While replacing the nearly 380,000 systems currently in the ground will be an effort that continues for years to come, we know that when we make the switch, our waters improve.  Suffolk County homeowners that are looking to replace their old systems with new nitrogen-removing technology may qualify for town and county grants and low-cost loans. Please visit reclaimourwater.info for more details about qualification.

In the meantime, make sure to check out the Gobler Lab’s Facebook page before heading to the water this Summer.